The Cubs, Sports, and a Rare Spot Where Men Get To Show Emotion & Affection

I was one of millions of people glued to my TV last night, watching the Chicago Cubs break their curse, and win the World Series in a dramatic Game 7.

I love watching championship games of all sports - there is something so moving about all the emotion I see flowing between the teammates (on both the winning AND losing sides).

And so it was last night.

The Cubs players first jumped for joy (literally), fists flying in the air, bouncing towards each other. They hugged. They embraced. 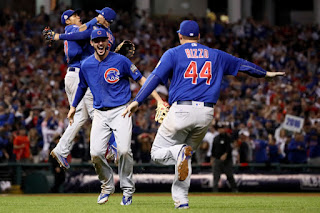 For some they smiled and yelled. For some, it was tears - of joy or relief or the release of tension after holding it together.

And as the minutes went by, many more long hugs with tears in eyes. It was marvelous. 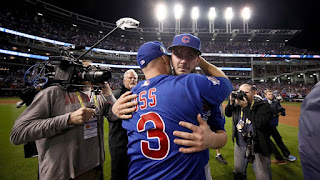 I've watched the other sides reactions, too (though the camera didn't spend time there last night). There is usually disbelief, and tears of sadness. I've watched players hold, hug and console each other as they grieve the loss of something they invested so much in.

I point at this because these displays - of emotion and vulnerability (other than anger), of comforting and affection (of each other) - are rarely seen in the male world. The informal norms and rules this culture has do not tend to allow it. And that's a pity, because under the stoic surface, men are far more alive than you'd think from looking at them. They grieve, they fear, they wonder, they hurt. they wish to be closer to each other but often don't know how to, or whether it would be OK with the other guy.

I have seen places other than sports this all does happen (my men's work with The ManKind Project at The New Warrior Training Adventure), but those seem the exception in this culture.

Perhaps it is the bond long-formed, the camaraderie, the fight fought together that allows it out. I'll keep pondering that. But for today (tired myself after riding the rollercoaster of emotions with both teams), I want to say it's a wonderful thing to see. And I'm glad so many people got to see it, too.
Posted by Unknown at 10:43 AM